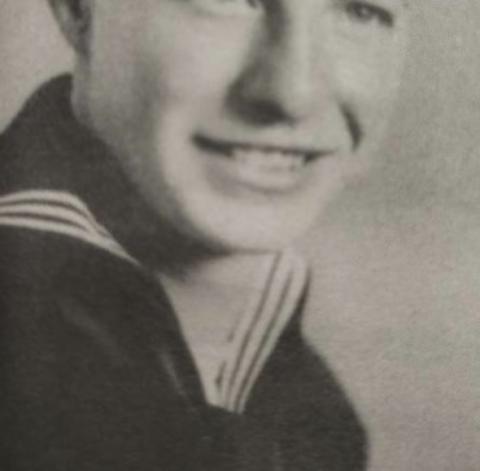 By:Kim BrooksExpress Editor     Last week Larry Behrends of Monticello brought to our attention information about Donald Stott, a local man who was killed at the age of 19 in the attacks at Pearl Harbor on Dec. 7, 1941.

“Donald Stott lived with William and Hulda Behrends on Highway 151, north of Monticello, from the time he was 5 years old until he was killed in Pearl Harbor,” penned Larry.

“Donald was like an older brother to John and Larry Behrends, although he was no relation. His dad was painting the schoolhouse across from there the Wagon Wheel restaurant was later built and sent Don to get drinking water from the Behrends’ farm just down the road. He got acquainted with Bill and Hulda and asked if he could stay throughout his teenage years until he enlisted in the Navy and lost his life at Pearl Harbor when the Japanese attacked.”

On Dec. 7, 1941, Stott was assigned to the battleship USS Oklahoma when it was attacked by Japanese aircraft. “The USS Oklahoma sustained multiple torpedo hits, which caused it to quickly capsize.” This resulted in the deaths of 429 crewmen, including Stott.

Stott served in the U.S. Navy. According to a January 1939 Express article, Stott was to report for duty at the Great Lakes Naval Training School in Chicago on March 1.

“He will spend three months in training in Chicago, after which he will have a 10-day furlough,” read the article. “After two more weeks in Chicago, he will be sent to the naval base at San Pedro, Calif.”

His brother, Raymond Stott, was also a serviceman at this time, in his second year. He was assigned to the USS Arizona. George Stott, a cousin, was also stationed on the same ship, in his fourth year of service. The USS Arizona also went down in the attacks on Pearl Harbor. Raymond was transferred off the ship prior to the attacks. (He would later be wounded by an invasion when serving in Italy.)

According to the DPAA, “The days, months, and years following the attack, the remains of those lost aboard the (USS) Oklahoma were recovered. SEA1 Stott’s remains were recovered from the shop; however, they could not be identified at the time and were buried as ‘unknown’ remains at the National Memorial Cemetery of the Pacific in Hawaii. In 2015, the DPAA received authorization to exhume and reexamine known remains associated with the Oklahoma using advances in forensic technology. SEA1 Stott’s remains were disinterred and identified as part of this effort.”

Stott was the son of Wilbur Stott of Monticello and Bessie Fleetwood of Fort Dodge.

Word of Donald’s death reached his father by wire, sent from Rear Admiral Randal Jacobs, chief of the Bureau of Navigation.

A Dec. 25, 1941 article in The Wyoming Journal noted that Stott’s aunt, Mrs. Harold Marshall of Wyoming, received word of her nephew missing in action or killed in action at Pearl Harbor. It was thought that Donald was the first Jones County serviceman to be killed in WWII.

A memorial service for Stott was held on Sunday, March 1, 1942, in Monticello.

The Express interviewed Stott’s niece, Betty Snyder of Monticello, in 1994 for an article on his life and sacrifice to this country. Snyder was a young girl when her uncle went off to war.

“Her last memory of her uncle was going with him to Dubuque as he left for the Navy at the time of the outbreak of war with Japan,” wrote then-Express Editor Craig Neises. “As an adult, she has been to see the final resting place of her uncle who is memorialized with his name on a plaque with the many others whose bodies were never recovered.” (Now we know, as of 2021, that Donald Stott’s remains were able to be identified.)

At the time, Stott was the first veteran from Monticello to have a gold star painted next to his name on a sign in front of the Monticello Community Building. The sign listed the name of each Monticello man serving in the military and when they were confirmed killed in action.

“Our mother always said, ‘He was a good boy,’” shared Larry Behrends.