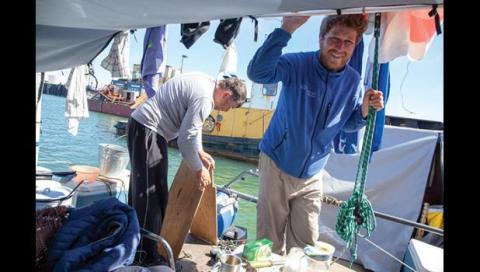 Three Russian travelers from Irkutsk spent a few days in Nome this past week on their catamaran sailboat.

They were on their way from Lake Baikal, which is in Central Asia, to Anchorage on a voyage with historic precedents.

Before Russia sold Alaska to the USA the route was well-traveled by traders shipping sea otter pelts to China. This current voyage has a different purpose.

“Russia and USA are very close,” said Anatoli Kazakevich, a member of the Baikal-Alaska expedition.

“But people in Russia don’t know anything about Alaska and people in Alaska know nothing about Russia. And this project is about travelling. We want to make a book ‘One Hundred Best Places between Lake Baikal and Alaska.’”

Lake Baikal is deep in Siberia, just north of the Mongolian border. Irkutsk was the center of Russia’s fur trade in the days of the “promishleniki,” the traders who travelled to Alaska for furs. China was the ultimate destination and the area around Lake Baikal became wealthy.

“We started last year, 30 of May,” said Kazakevich. “We started from Irkutsk, from the middle of the city, and go to Baikal.” Once on the lake they entered the Lena River, one of Russia’s longest rivers, and traveled over 1,200 miles to the Aldan River, a tributary of the Lena. Firing up their twin 40-horse power Mercury engines, they headed upriver until they met the Maya River. At a village of 400 named Nelkan they tore down the catamaran, put it on a big truck, and portaged it 124 miles to Okhotsk.

“This is interesting because 150 years ago people traveled this road,” said Kazakevich. “But when Russia sold Alaska the traffic stopped. I think it’s a good idea to start travelling this road again because it’s very beautiful.”

From Okhotsk they hugged the coast, seldom sailing more than 18 miles from the shore. Their last port in Russia was Anadyr, their first landfall in Alaska was Nome.

The catamaran can be disassembled in a day. It takes two or three days to put it back together. The vessel is bare bones but seaworthy. The sleeping area is a tent and cooking is done on a small gas stove on deck. Forward of the tent is a stack of logs cut to firewood dimensions. One of the Mercury outboards no longer starts.  The vessel is 40 feet in length and 18.5 feet wide. It draws 20 centimeters of water, about 8 inches. It can do 15 knots under full sail. It can accommodate a crew of six but only three made the voyage to Alaska from Kamchatka. Asked about a gun to protect against mischievous bears, Kazakevich replied “We get along with bears. No gun.”

They are on their way to Dutch Harbor and from there will head for Anchorage, the end of the journey. Once in Anchorage they’ll look around and then fly home.

“And we’re hoping we can find some partners, some crazy guys in the USA, who can do the same trip from Anchorage to Lake Baikal,” said Kazakevich. “We’ll give our ship to the team and it’s possible to do the trip in four months. It’s an interesting trip because wild nature is so beautiful. No people almost. A lot of whales, birds, fish and bears.”
The expedition’s daybook online tells of their stay in Nome.

“Moving around Nome at a normal tempo doesn’t happen,” reads the entry, written by Kazakevich. “Everywhere you look there’s something interesting connected to the gold rush, dog mushing or Russian America. It’s a compact, open air museum where you want to examine every house from every angle. And then examine every detail.”

“Another history we’ve begun to study starting in the Chukotan village Uelkal is the air route which during the Second World War the USSR flew Lend-Lease airplanes from the states. Uelkal was the first landing on the Russian side while Nome was the last place in the USA.” One more point on their route is connected to the history of Alaska-Siberian travel. Anchorage is the final destination of the expedition. There they plan to visit the memorial to the AL-SIB pilots, the flyers who ferried the aircraft from Nome to Uelkal.